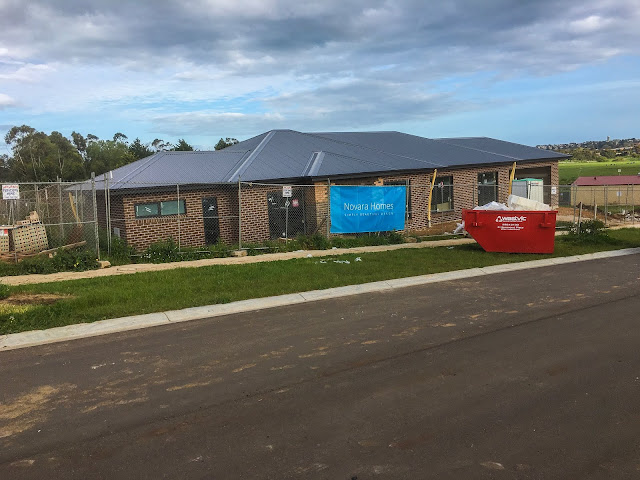 Dropped by the house tonight after work and snapped a few new photos. It looks like the brickies have been back at it today, the brickwork has been cleaned and looks amazing. 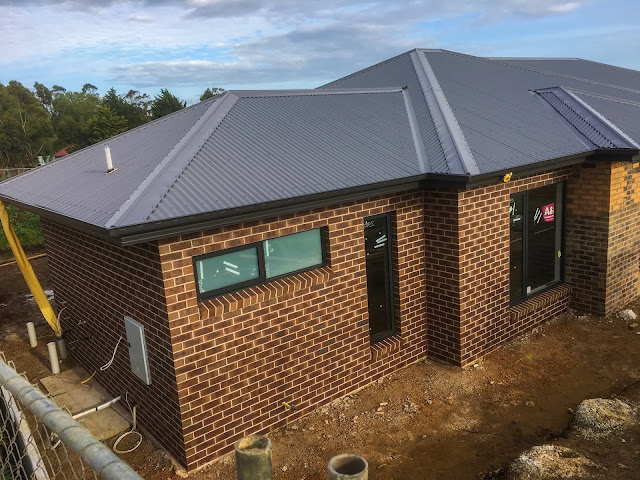 I'm not sure why I haven't taken a straight-on shot like this before. I had to photomerge (in Photoshop CC) two iPhone 6S + images together because it won't quite fit the whole house in one photo from the footpath across the road.

The section over the top of the pillar has been done, there looks to be a lintel and like they've removed some bricks to put it in, so it's possible the detail was overlooked in the drawing and is now resolved. It certainly looks more complete now. We also have our front door! 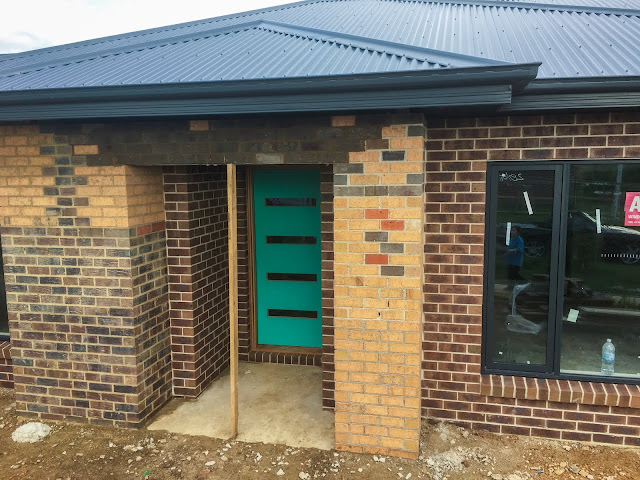 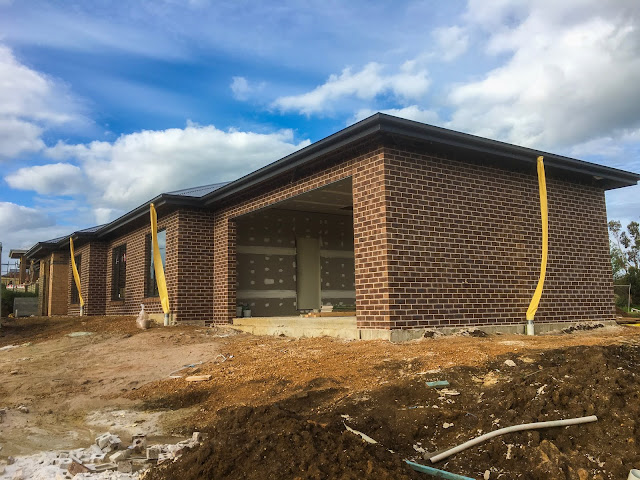 Clean bricks from the "low" side. 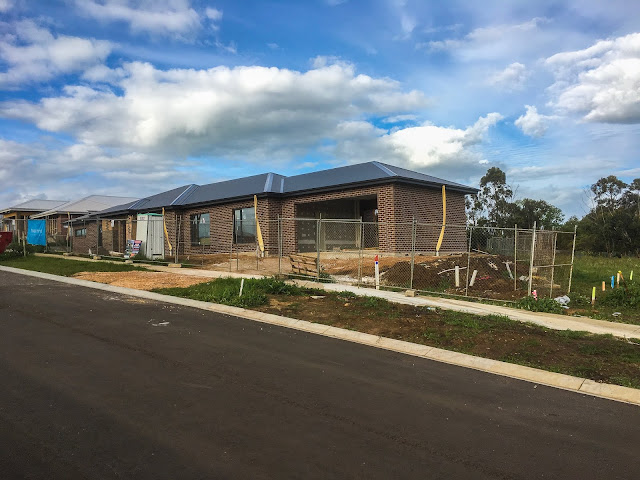 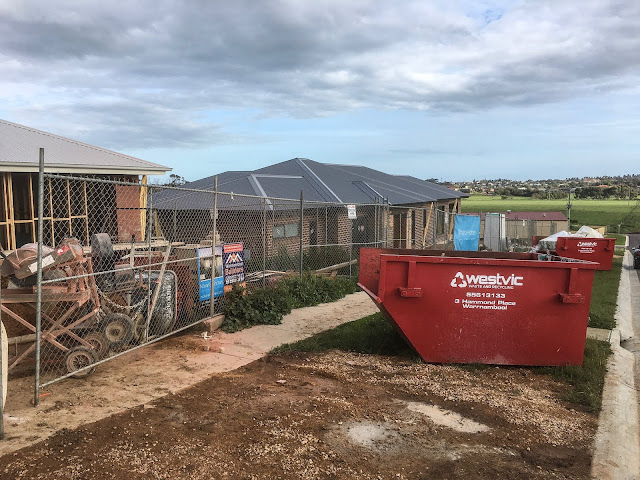 The playground in our estate is finally opened so I took Scarlett up to have a bit of a play and on the way couldn't help checking out the roofline from further up the street. The solar HWS panels might be almost invisible on the roof from this angle once they're mounted. 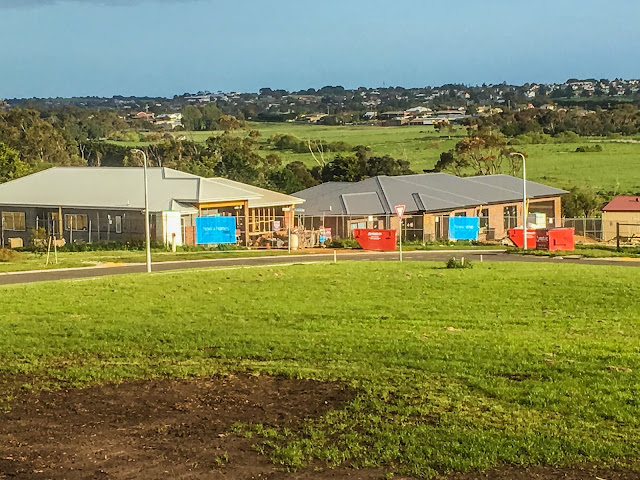 This is taken from the top of a climbing tower (the highest point of the playground).

I plan to try and organise a time to do a walk through the property later in the week to take some interior photos as I'm told the cabinet makers have been busy and have at least the laundry cabinetry complete.
Posted by Clinton Warburton at 4:27 AM No comments: 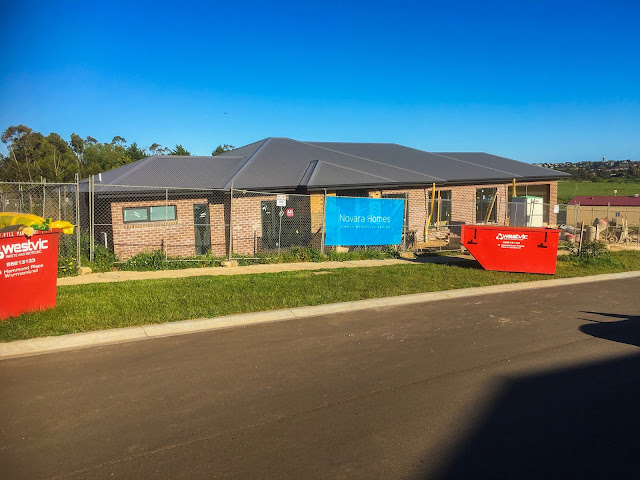 Dropped by tonight to check the progress and the pillars are finished. A number of the brick sills appear to be done too. 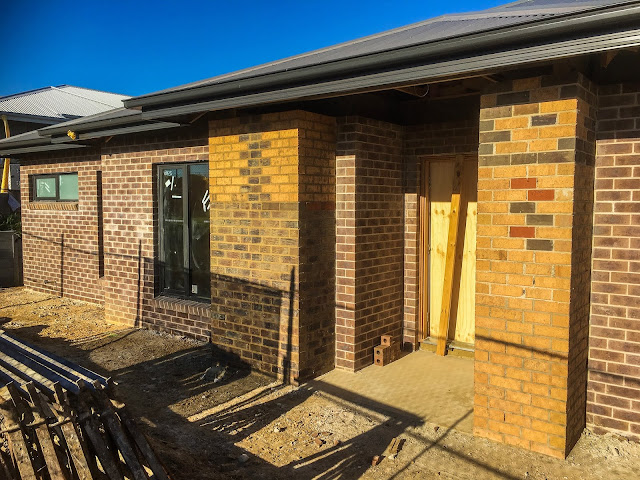 The top section of the pillar still has to be built out as per the image below before it can be rendered. I have no idea how this gets done - maybe a timber frame and cement sheet or similar? 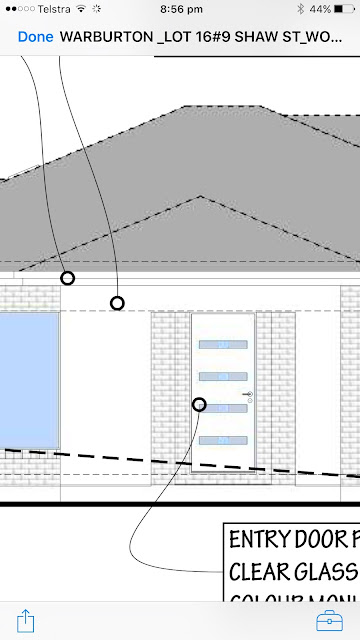 Posted by Clinton Warburton at 3:30 AM 14 comments: 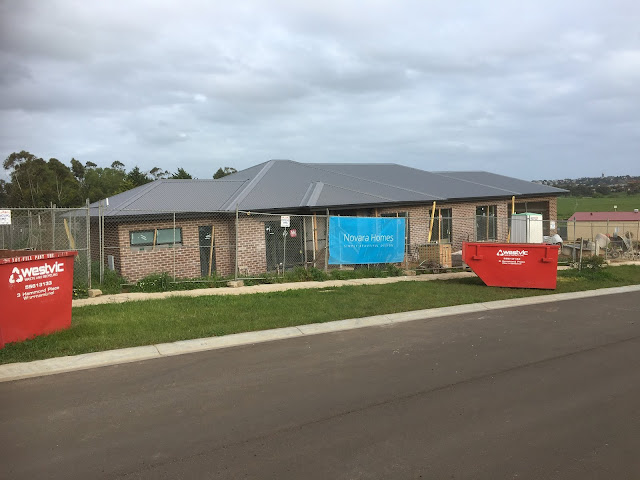 The bricks are very nearly finished. Just the sills and one lintel to go, as well as the pillars that will be rendered - pillars that they have started today! 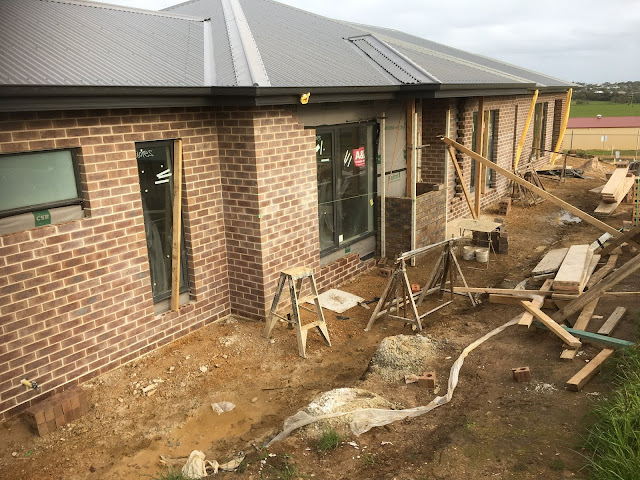 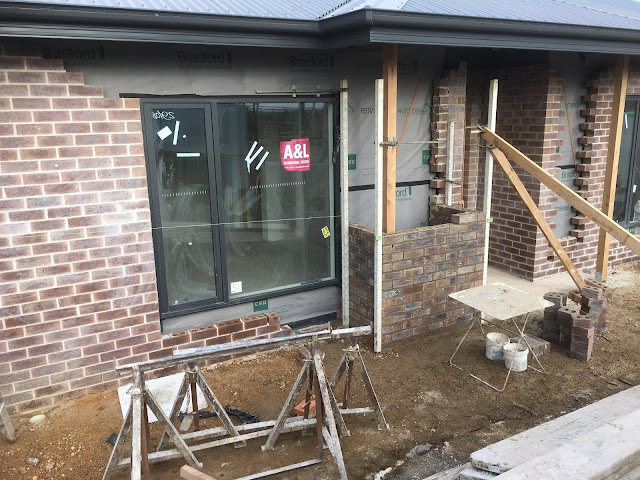 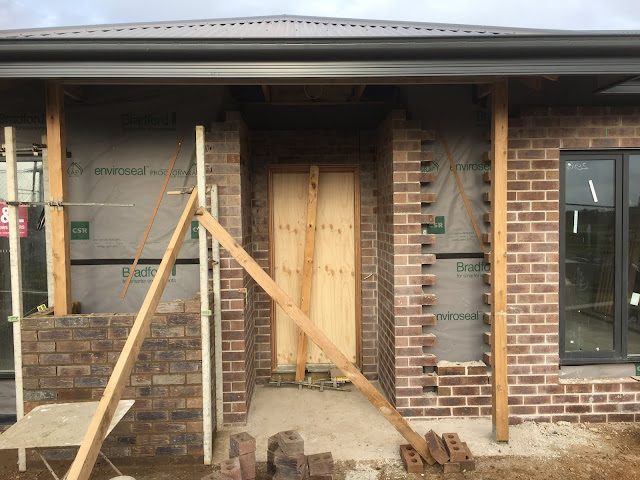 We now have a much better view of our entrance. It looks like our proper entrance door is sitting in the garage so hopefully we get to see what that looks like fitted very soon! 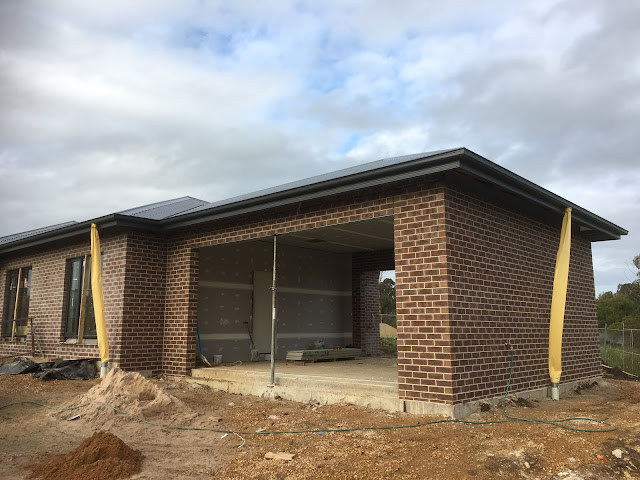 It looks like they have cleaned some of the brickwork; the colour of the bricks really pops here!
Posted by Clinton Warburton at 4:02 AM 8 comments:

We are nearly at lock up! 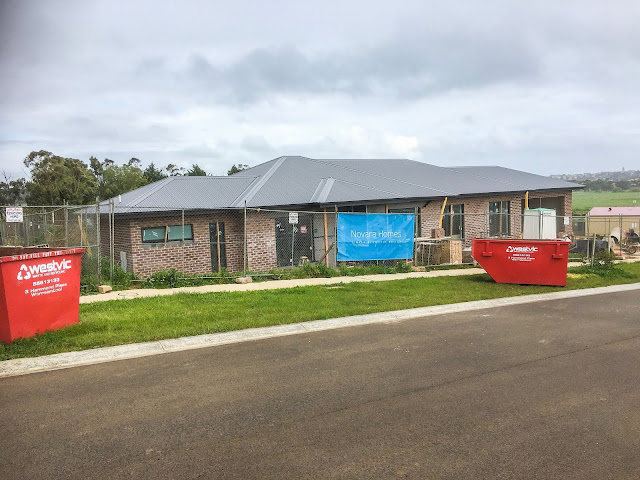 The bricks and window lintels are almost all done. 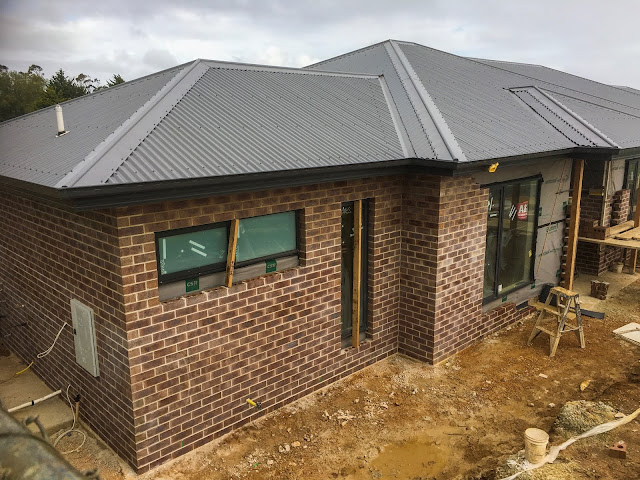 This is the front corner - the toilet, walk-in robe and master bedroom. 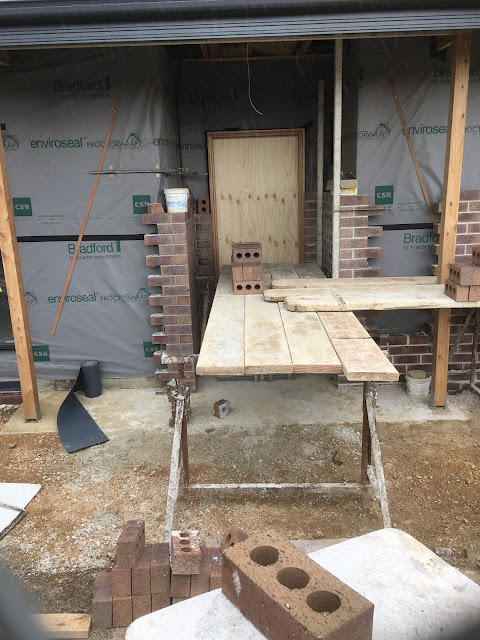 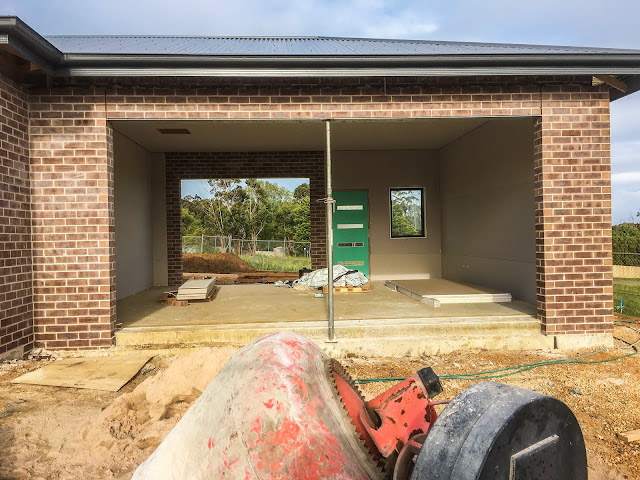 The plasterers have done the garage - cool. To be honest it wouldn't have worried me if this was left as bare stud walls but apparently that's not how it's done these days. It does make it look much more finished.
Posted by Clinton Warburton at 3:27 AM No comments:

Our House Build - What a difference a month makes

Just one month and three days ago (September the 2nd) I posted this photo:

Today I took a new one from practically the same spot. Strangely the weather seems to be worse rather than better, but the house sure has progressed:

It's interesting too, because I've been watching it happen and driving past nearly every day, it feels like it's been months since it was at frame stage - and yet here we have the date of the blog posts here as proof it's only taken a month to progress this far!
Posted by Clinton Warburton at 3:50 AM No comments:

Only a little update today, the garage lintel is up (although the temporary frame behind is still there - at least for now) and the bricks are done. There also looks to be some material for cladding the eaves stacked in the garage. 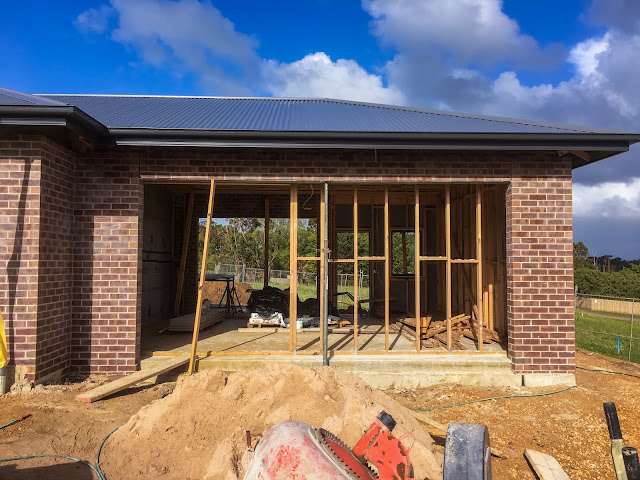 A bunch of coloured pegs have been put in the block on the "low side" of ours although I'm not sure what they're for - they may just be to indicate where the pipes run below (some of this area is an easement) but I'm not sure. They run all the way down the side boundary of that block too. I guess time will tell. 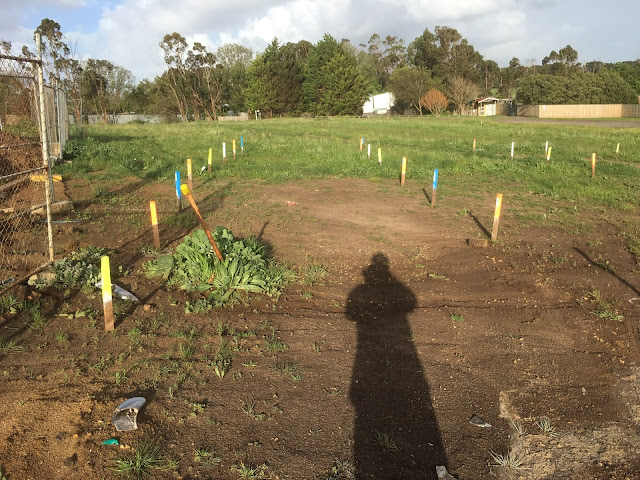 It looks like the brickies have moved their guide sticks to the back wall of the ensuite/walk in robe so soon the bricks will be making an appearance on the "high" side of the building.
Posted by Clinton Warburton at 2:14 AM 2 comments: 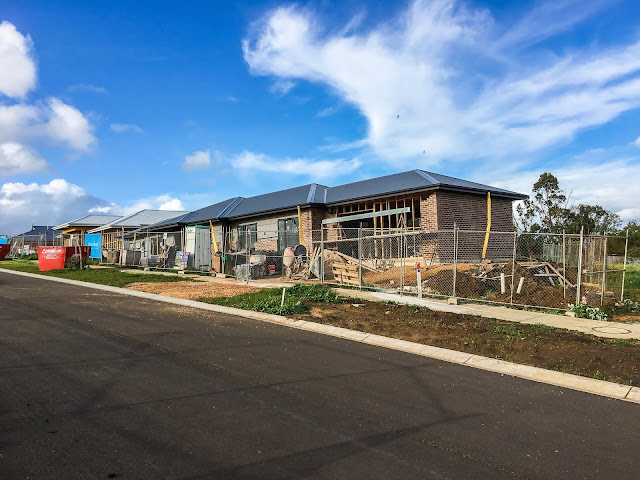 The bricks are coming along - each day more and more of the house is revealed. 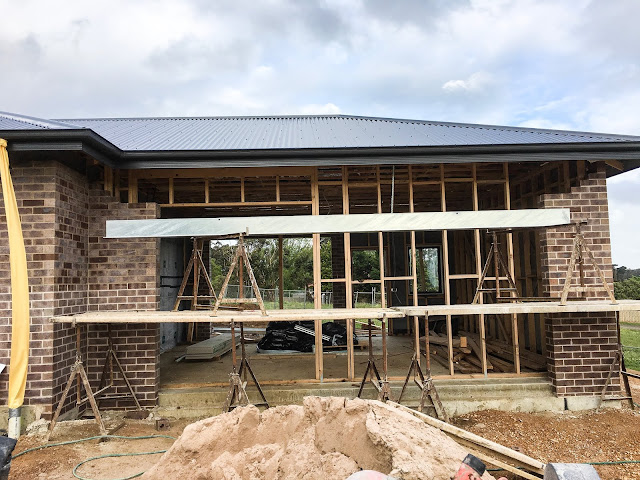 It looks like the lintel that will sit above the door opening for the front of the garage is ready to go in tomorrow. 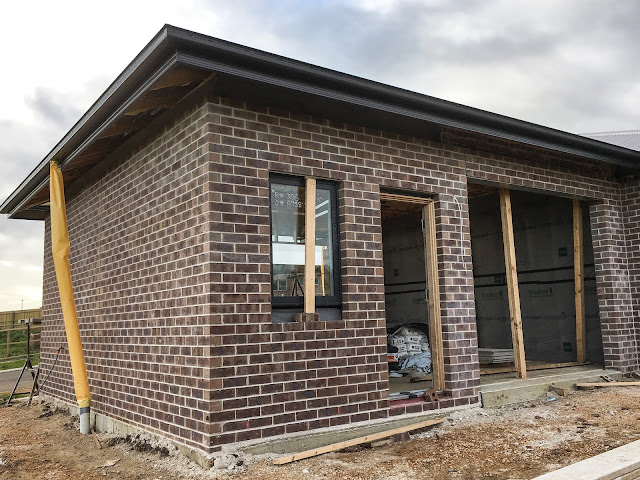 Lots more progress has happened at the back of the building, the wind was pretty icy when I dropped by tonight and it almost always comes from the front of the building so I don't blame them working out the back where it's a bit more sheltered! 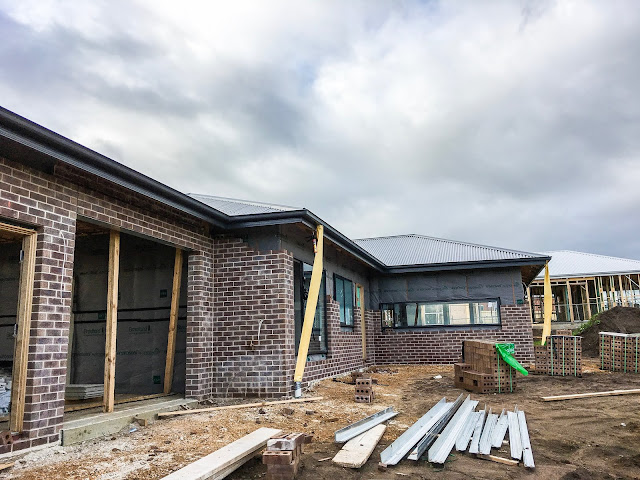 Lots more lintels here - the garage ones are already installed and the temporary wall frame has been pulled down. 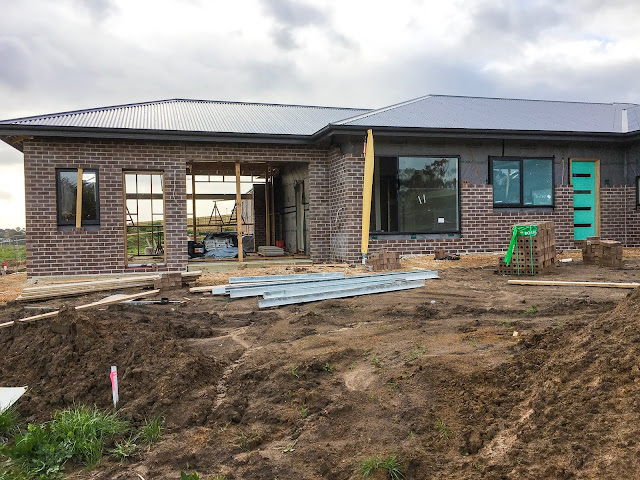 Good to see the head height of the garage door and the windows line up spot on (ignore the garage PA door and window as there aren't any windows/doors at this height at the front of the building but the opening height of the front door is the same as the rear.) 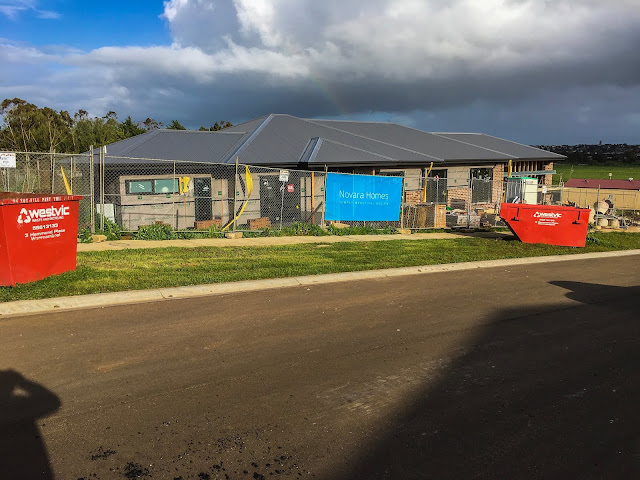 They also made a start on the area next to the front door (behind the blue banner) today but I didn't get a good photo of it - this is where one of the two rendered columns will be going.
Posted by Clinton Warburton at 3:25 AM No comments: