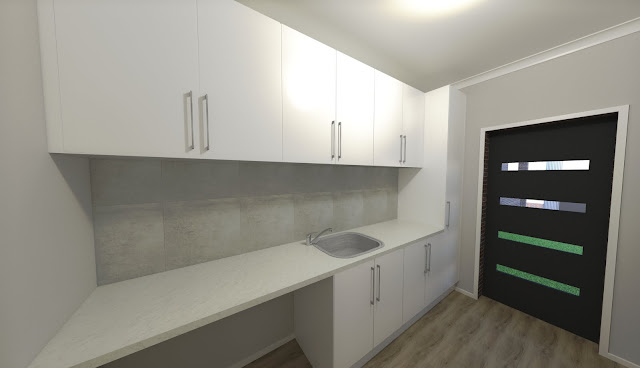 Here's a render of the Laundry including basin, although the tap location isn't likely to be where it'll actually end up. Also the handles on some of the bathroom cabinetry will be 196mm instead of 256mm long (I think the laundry ones will stay full size though)

I've compiled a list of things we will need to organise during or post-build:


As well as this I've now got a list of items i'm waiting for or need to update before we can get our mortgage broker to kick things into gear with the bank:
Some other things I'm not sure if I've already mentioned on here that we're doing:
That's all I can think of for now, but as I think of more I'll document them here (as I've mentioned before, this is as much for my own timeline/record/purpose as for anyone elses!)

I've got another render (of the kitchen) cooking up in SketchUp!
Posted by Clinton Warburton at 3:26 AM