Our build has been thrown under a shadow of sorrow with the sudden, unexpected passing of my father-in-law Michael Tilley on Tuesday 5/7/2016. Since the internet has the great ability to store any information for apparent eternity once written, I've copied below a tribute I wrote for his funeral. 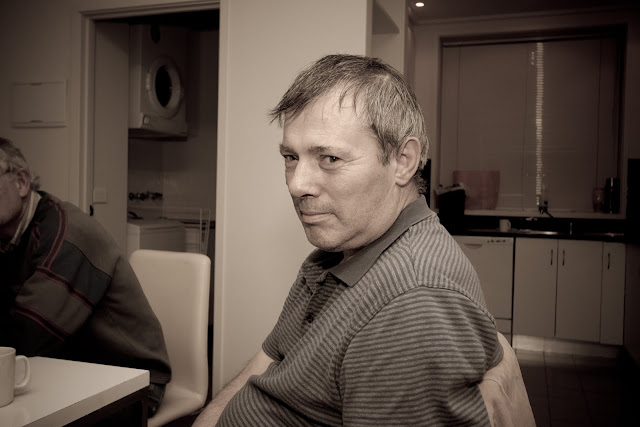 If Malcolm Forbes was right when he said “he who dies with the most toys wins” then Michael certainly must be standing on a podium in heaven.

He had a TV for every room of the house (including the garage). A stereo system for nearly every room, a desktop computer and a laptop, a smart phone and a tablet PC. A playstation, at least five external hard drives and numerous WD TV units. He’d collected just about every movie ever filmed as well as numerous TV shows.

In the shed he had a thicknesser, buzzer, dimensional and table saws, borer, grinder, pedestal drill, belt sanders, wood lathe, band saw, dust extractor, router table and a plethora of other powertools.

He had a trailer, a push mower, a brush cutter - and strangely for someone with about 5 square meters of grass to maintain - a ride-on mower.

He was the quintessential Aussie Bloke, who loved his beer and had to remove the safety guard from every piece of equipment he owned. Equipment he operated in his favourite pair of Japanese Safety
Boots as he called his thongs.

As I’ve discovered over the last few days he’s taught Scarlett how to use a bench grinder and a pedestal drill - although I’m not sure I’m game to let her just yet!

Before Michael, I’d never met someone so offended to be referred to as a carpenter.

I’d never met someone who had such capacity for accuracy without first measuring.

I’d never met someone who acted as if they had so little, yet gave so much.

He gave his time, becoming our private day care for all three of our children each from as young as six months old - allowing us both to work full time to achieve our dream of building our own home.

He gave money from his super to help us on achieve our home - in his words giving Sarah part of her inheritance early.

Fortunately he lived to see the earthworks completed on our block of land - but unfortunately taken before he could see the waffle pods for the slab blown away in the wind - something I’m certain he would have found extremely entertaining.

While he won’t see the house finished, or celebrate our housewarming - I rest assured in the knowledge that he had printed copies of the plans and - in his highly complimentary words - “not found anything wrong with them”.

Micky T - you’ll be missed, even your jokes about my car being run by a wound up rubber band.

In the week and a half since his passing, we have been busy moving his former home workshop into our garage. I'm glad I decided to make the shed so big now - it would appear I've got at least 36m2 of tools to store! 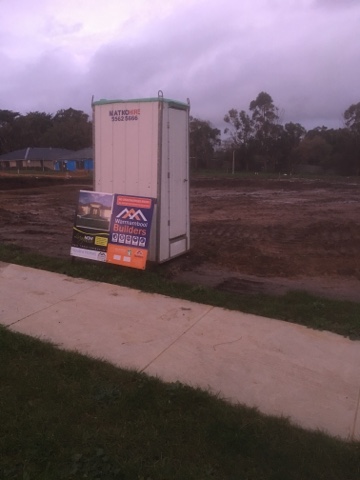 In the interim, our block has gained a porta-loo - anyone who's ever read a build thread on homeone before will be familiar with this as being one of the first on-site milestones to occur. 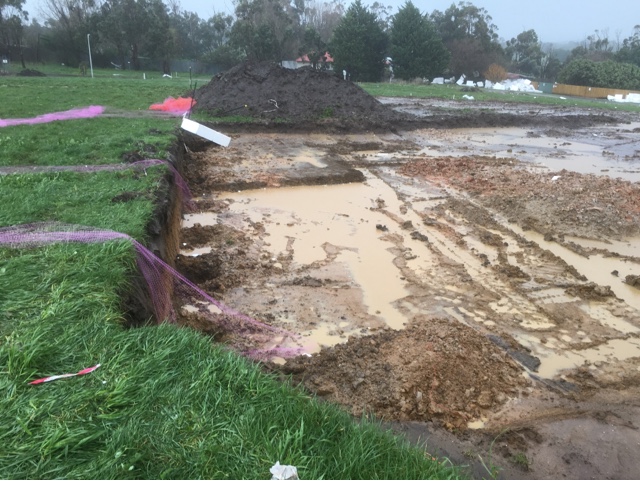 The holes for the retaining wall started to be bored but wet weather and wild winds appear to have forced them to retreat for the day. 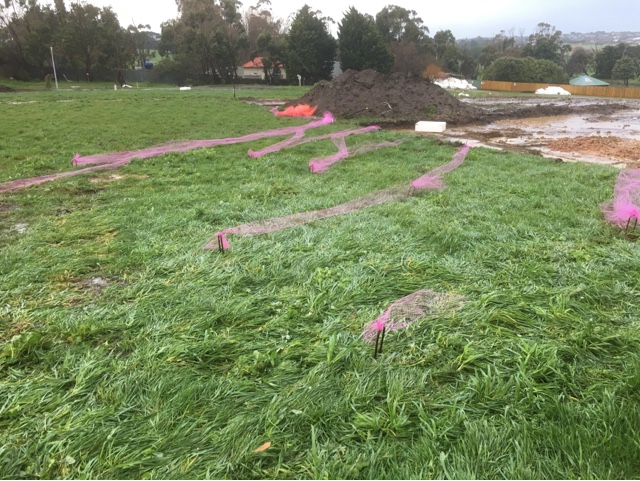 At first I wasn't sure what these hooks and pink mesh were for... until I looked into the distance, that is. 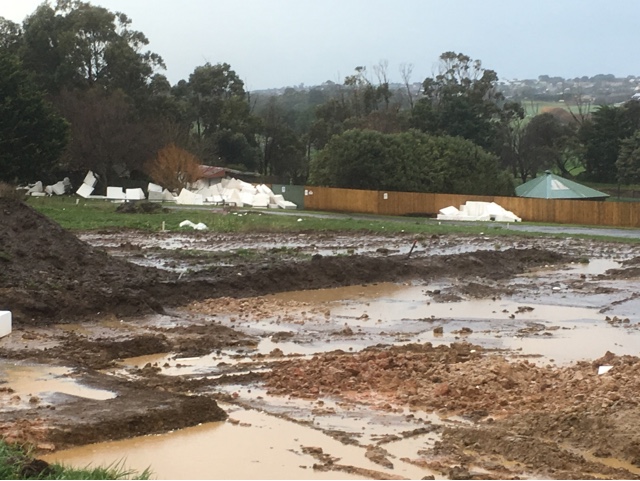 As I mentioned in my tribute to Michael above, the waffle pods delivered for our project appeared to have somewhere else to be. 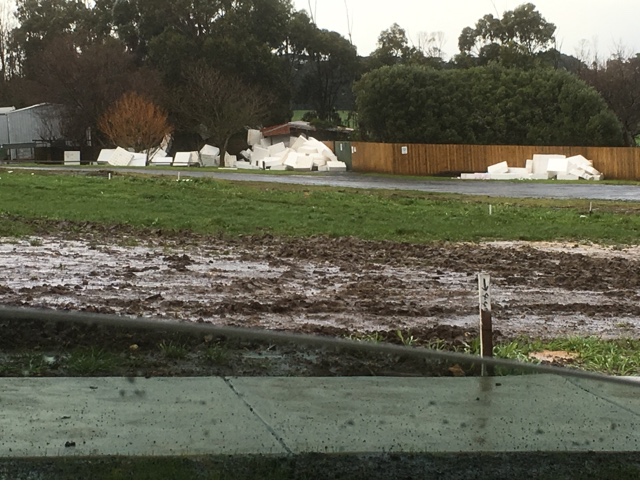 We'd had wind gusts up to 100km/h (maybe more!) this day - which also made moving things with an open trailer difficult for me! 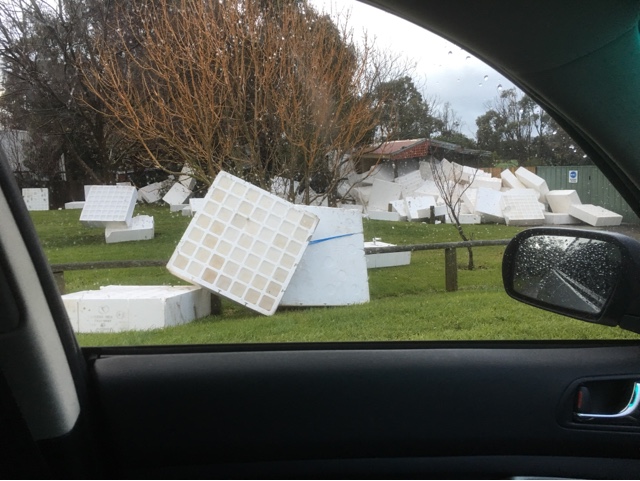 These pods are quite big and would have been impossible to even attempt to collect in the wind. 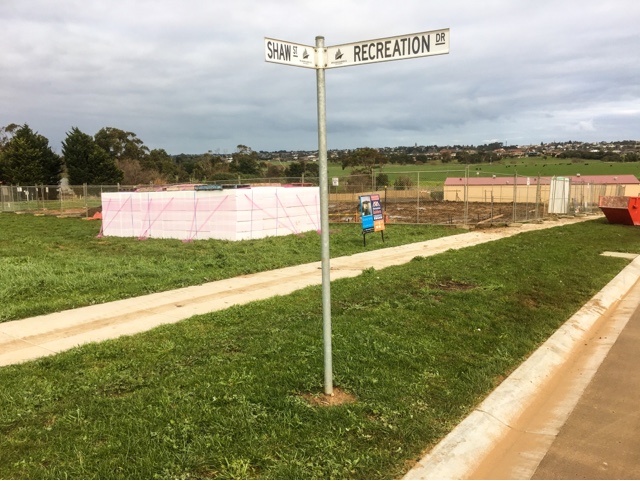 Today, we said farewell to Michael at his funeral; and I thought it a fitting time to bring the kids past the block to see the progress - what a great surprise- new waffle pods and a temporary fence. Our block has gone from looking big (with nothing on it) to small (with lots of top soil stored on site) to big again (with the fencing) 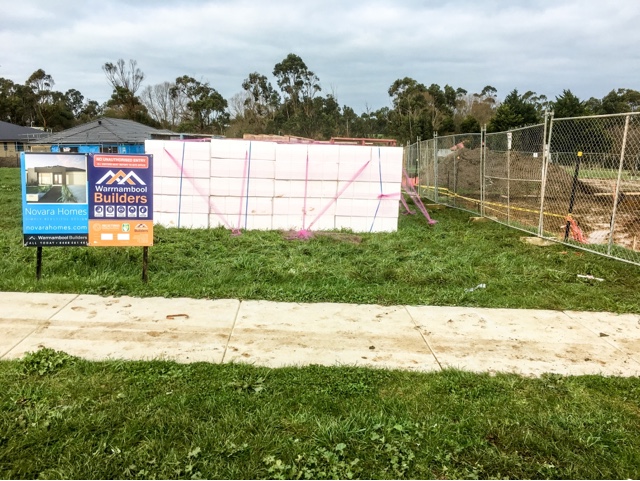 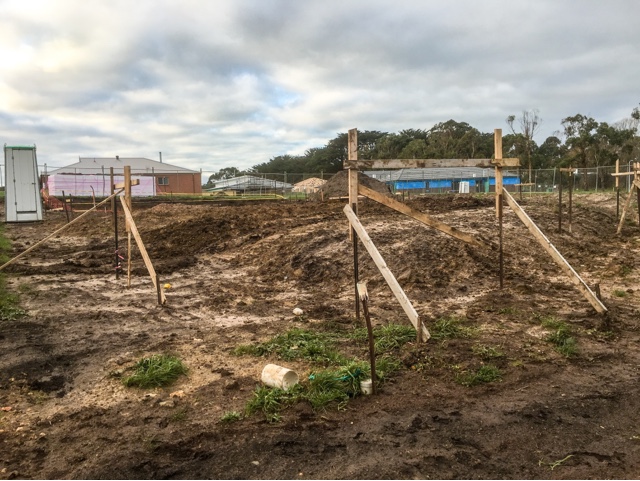 There are some set out markers - from my understanding these are used to measure from to get a lot of the building's dimensions in space. 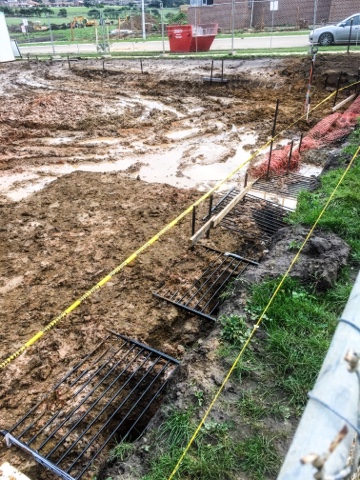 Retaining wall holes covered to prevent anyone silly enough to venture inside the temporary fencing from falling in.

Posted by Clinton Warburton at 1:06 AM