Given the amount of information I seem to have been collecting through this process, would you believe I only managed to take a single photo during our selection appointment today? 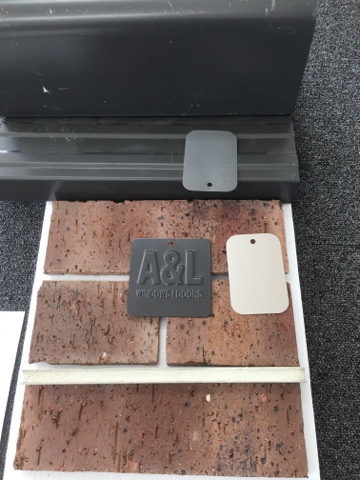 Basically just confirming my original colour scheme and what I've been doing in SketchUp - monument gutters and fascias, basalt roof, Boral Horizons Mocha bricks. We saved a huge amount of time by already having made these decisions!

The only change was off white mortar (I hadn't specified anything previously) in an ironed finish, and colourbond dune for the porch render. It's only a small section of render so it should look good being the lighter colour and will break the width of the house up a little.

We've specified pretty standard round PVC downpipes and quad matched to the bricks, but we haven't specified a colour for the downpipes, meter box and eaves so I've emailed them and asked what we need to do there.

The builder had a new facade option for us to look at which we liked, with some small adjustment - the porch will now be much shallower, but will be wider. This will mean even with the render I believe it should work out cheaper. The windows at the front of the house will be taller with a single awning sash to one side and a bigger fixed glass section in the A&L windows boutique frames (the same as our sliding doors - a bigger, bolder semi-commercial style frame). Jarrod (the owner of Warrnambool Builders) is going to cover the cost of getting the energy rating re-done with the new window design as the changes were his idea (he'd prefer to build a nicer looking house - how good is that?)

The beauty of the whole selection process with a smaller custom builder (or specifically Jarrod and his team at Warrnambool Builders, if you're lucky enough to be building in an area they service) is the ability to have in one place at one time the selection specialist, builder/estimator and drafter (many of these hats are worn by a single person!) and as such you can ask "how much to change that carpet" or "what if we run the tile to the ceiling" and get an accurate answer on the spot, rather than a drawn out process that runs to weeks as I've seen mentioned numerous times on other's build blogs and threads on homeone.

Now the rest of this post is going to be a rough play by play - we don't yet have a copy of the selection decisions we made on the day but all of the swatches were photographed as we chose them and will be presented to us in a document which I'll share in some fashion on here once we have a copy. As a result I may be taking a semi-educated guess at the selections we made (especially those that Sarah decided on rather than myself!)

Firstly, flooring. The mFLOR system has a few colours available in the Victoria Plank collection - we chose I believe one of the more neutral colours in an oak finish although I don't recall the exact shade, possibly martinsyde oak:

We then asked if it was possible, and chose a second vinyl plank for the underside of the kitchen island bench; a nice contrast to ebony:

We have gone I believe a polytec melamine in a gloss white; although the gloss sample was missing, so we haven't 100% confirmed this until we can verify with a sample - for all the kitchen cabinetry. Originally we'd tried honey elm and sublime teak but all seemed to clash with the floor finish when comparing the materials side by side.

Hopefully it will look something like this (although this is something called ultra-glaze, so we still need to confirm):

Overhead we have no handles and on the botom doors the handles are actually very similar to the image above - a brushed satin chrome style finish.

We've gone for Dulux Dieskau for the walls Vivid white in semi gloss for the trims, in a normal low sheen for the ceiling. We've gone a charcoal carpet-  we actually upgraded to their second level carpet as the pile is just a bit thicker. The builder uses a standard underlay that's much thicker than what most volume builders use which is nice, but Sarah feels the thicker carpet will last longer and feel nicer. It's also only $800 to do the upgrade so like the bricks, a bit of a no-brainer.

We're happy with standard cornice and architraves/skirting so I didn't even attempt to look at the options there.

The walk in robe I've been rendering in a laminex or coloured melamine, the spec only shows it as standard (boring) white - I've asked how much it would cost if we wanted to choose something else but it might be easier to stick with white given that will allow it to be added to or adjusted very easily and cost effectively down the track.

I added a couple of rear LED flood lights to the rear garage PA door and the laundry external door, as well as putting the lights for the garage and laundry on a double switch setup at the external doors; this is mainly for entry/exiting to the shed at night or for washing cars at dusk or in the afternoon in winter. Not sure yet what they'll cost but I'm sure they'll be invaluable.

Bench tops in the kitchen (yes I'm aware I'm jumping around a bit here, I'm just writing it down as I think of it - I've mentioned before this is as much my diary for this process as it is a record for anyone else interested in the process!) are to be smart stone arcadia (I believe, although will confirm once we get our selection document!):

- we've chosen a matching gloss laminate for the butlers pantry bench tops; although I've got no idea of it's name or even brand.

For the laundry and powder room bench we've gone a calacatta marble style laminate, with the gloss white cabinet doors and handles matching the kitchen. The main reason for this is because the vinyl plank floor continues through from the living room, and again we didn't want to have too much going on.

In the bathroom we've gone a charcoal tile, which we've also used in the ensuite. This tile matches to the vinyl and the carpet, so it will flow quite well in both cases. Our original choice is no longer made (although they still had the sample) but there's another from a different range that's very similar. The big benefit is that it's the same size as the wall tiles we've chosen which is a concrete style large format tile, so the grout lines will line up. For the grout we've chosen the closest colour to a match for each tile so it should just disappear rather than be too contrasty. We're also going to run the concrete style tile as the splashback each side of the window in the kitchen, for the bath hob (top and side) in main bathroom, for the splashback beneath the vanity in the laundry, bath, ensuite, powder room and maybe even the butlers pantry. I can't be sure because at one point we chose a very basic white tile for all of this but then changed our mind!

My head started to turn to mush toward the end and I can feel it happening again as I try and recall this part of the process. I think I said to someone when I got back to work that if anyone asked me about tiles for the rest of the day I might kill them with one!

We haven't specified a material for the adjustable shelving in the butlers pantry (or I don't think we did) or finish/stain for the entry way slats.

We chose white doors for the kids robes and white for our blinds.

Sarah conceded to Orangeade for our front door. I've ordered an A4 sample sheet from dulux to make sure we don't actually hate it as despite being my idea, I'm still not 100% convinced. I don't want red (it's done to death by countless others) but I don't just want it bland and to just go monument like most of the other bits of the house.

Speaking of monument, the rear roller garage door will be monument, as will the front panel lift door which will be horizontal line profile but just plain monument colour.

I'm going to get Jarrod to price the retaining wall to be done by a contractor, but for him, mainly so we can finance and do building permit for the wall with the rest of the build. We'll still do the groundworks ourselves though.

Anyway, I'm off to email poor Kellie at Warrnambool Builders a bunch more questions!
Posted by Clinton Warburton at 6:06 AM