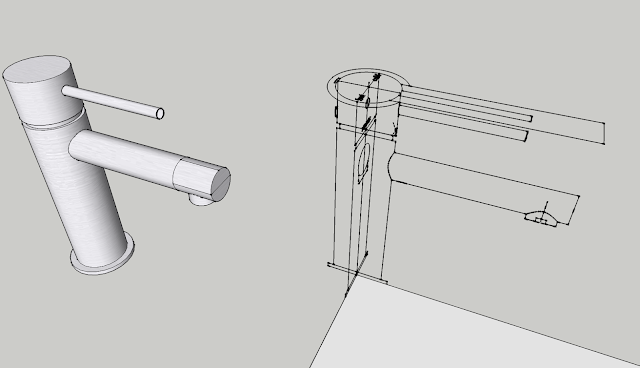 Drawing the tapware has taken a bit of doing, but it's been a good challenge - it's always good to be forced to learn some new techniques and this has certainly helped! The image above is after the mixer was drawn - I took the CAD (2D DXF) from the Phoenix website, imported it into a free trial of SketchUp Pro (installed onto a laptop here because my trial had run out on my main PC) then saved as a sketchup file, imported, split the top, front and side views, re-scaled to match dimensions on the drawings on the manufacturer's website, then rotated and aligned the three views and drew in 3D to match the views. 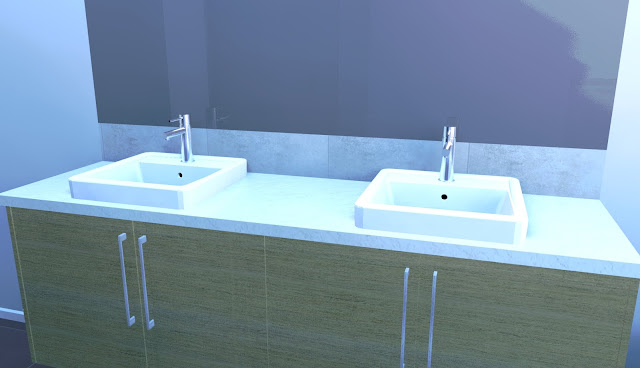 Textured and rendered, the result is a relatively accurate rendition of the desired product. 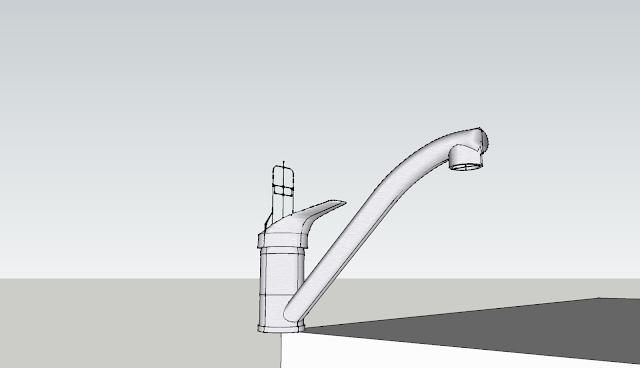 This one isn't quite true to the drawing/original as there were only two views - the head is supposed to more of a squared off-oval shape but because I couldn't see what it was supposed to be well enough, this has to suffice. The rendered version looks pretty close to how it's supposed to look. Currently this is specified for the butlers pantry and laundry. 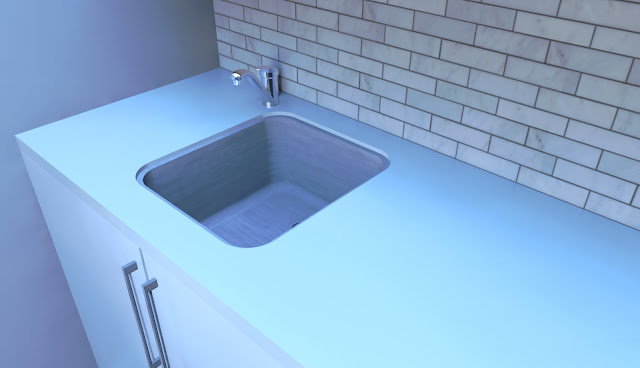 The drawings for the butlers pantry don't actually show the location or orientation of the tap so I've just guessed here and put it off to one side, it'll probably end up being centered. I've also applied the alternate splashback tile here. I am unsure but at a guess it'll probably have to wrap around to the side wall too. 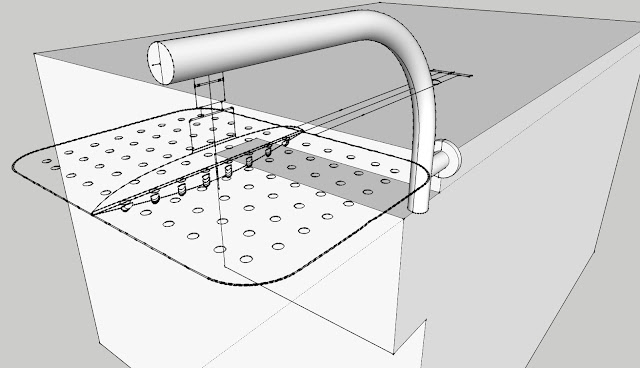 The showerheads are probably the most complex item I've had to model from scratch so far. Here I've copied the arc and straight centerlines from the manufacturer drawing, sized a circle from the top and side drawings and used the follow-me tool to sweep the shape of the arm. 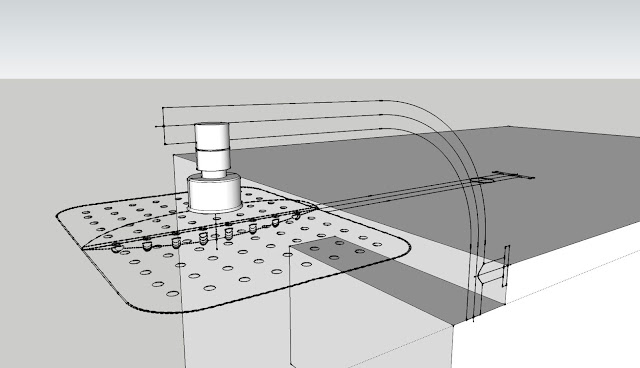 Next, I've grouped that and hidden it to make way to allow me to draw over the existing geometry (I can intersect them later). I snapped the line tool to the X and Y axes to draw a triangle and then used that to start the circle tool on the right plane for the part extending down to the showerhead. Then I used the push pull tool and multiple instances of the circle tool to vary the size depending on what was shown in the drawings. 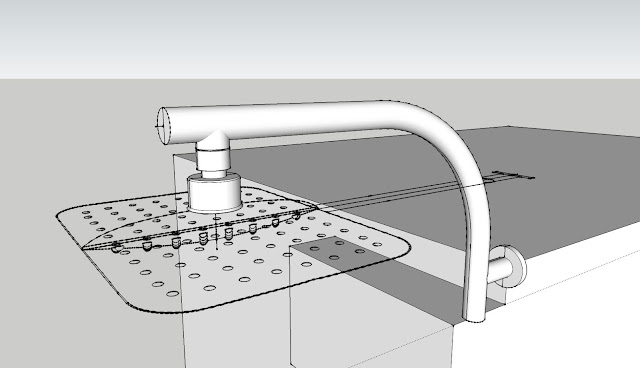 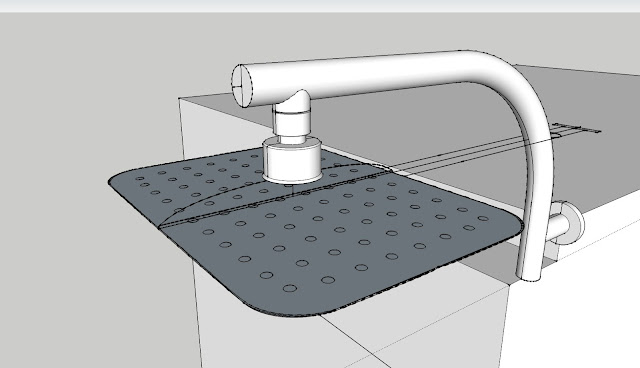 Here I've used line tools and the arc tool to trace as close an approximation of the shape of the showerhead as possible. I then deleted the surface and created a side profile of the top and bottom for half then used that to sweep the shape and deleted any double ups. It might have been easier to use the offset tool and then the move tool to do this and if I did it over that's probably the approach I'd take as it would result in neater geometry however it might not render as well (more facets for harsh reflection) 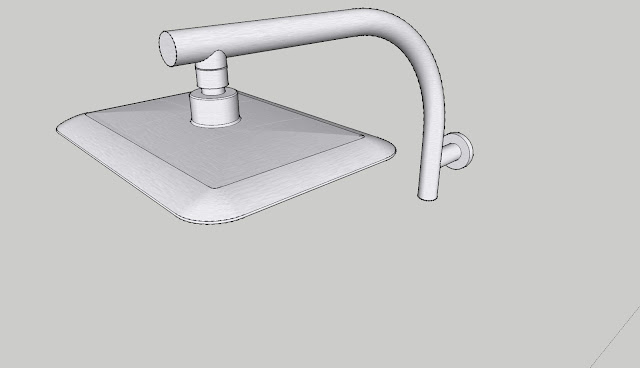 Here's the swept shape, after using the shift key and erase tool to "smooth" any jagged geometry left over. I've also intersected the two original parts (see the top) 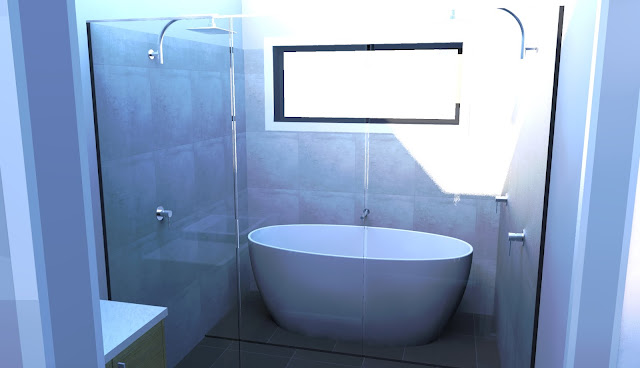 I didn't bother detailing the nozzles as I feel it probably adds too much complexity to the model, it renders OK without it. 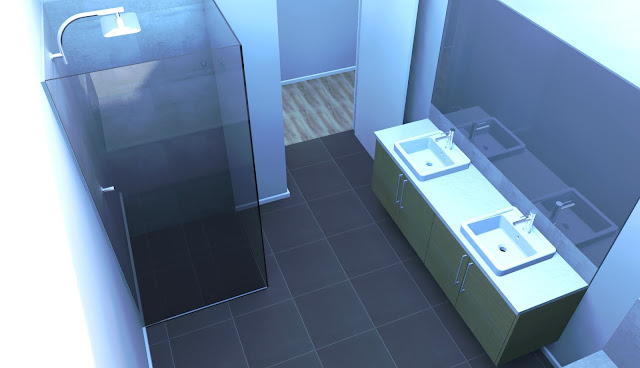 The light is still a bit funny on all of these renders as I've been running them with the light layer turned off and the roof and ceiling off - it allows the renders to complete much quicker (20 minutes each) to allow me to more easily check my work as I go.

Posted by Clinton Warburton at 4:21 AM