We have a selections appointment early next week, so there haven't really been any changes bar getting an email informing us that we need some double glazing to reach the mandatory 6 star energy rating. I don't yet know what that's going to cost so once I do I'll post more on that.

In the meantime, to better visualise the spaces I've started drawing up some furniture in similar dimensions to items we have, or plan to purchase. 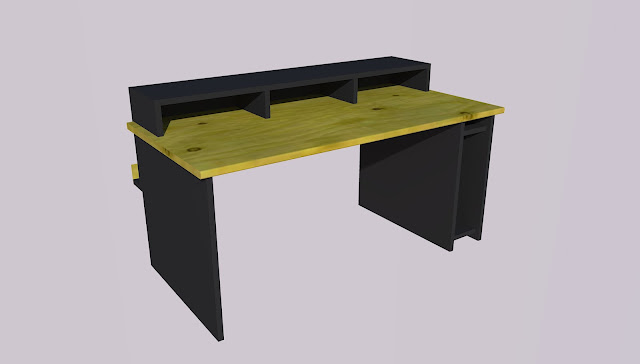 The first is my computer desk. I built this years ago to handle 2x 24" widescreen displays, a hutch for the computer as well as plenty of space around keyboard, mouse etc for drawing/reading documents etc. It's come in very handy during this drawing process!! I had a sketchup model for it (it's one of the first things I made) but I don't know where I saved it, but it didn't take long to re-make now I'm all over how sketchup works! 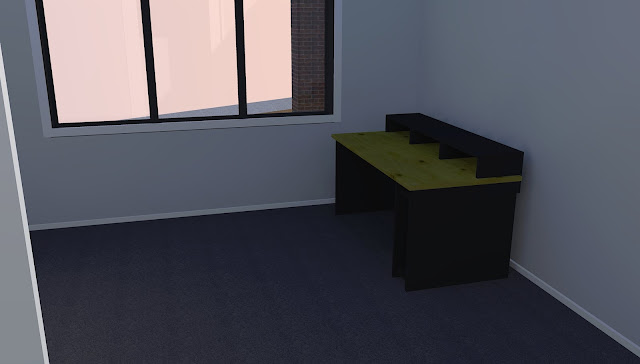 Here it is placed in the theatre room, this will likely be its temporary home until I can fit out a small office in or at the rear of the shed. Originally we'd planned a study off the garage; but this proved cost prohibitive. 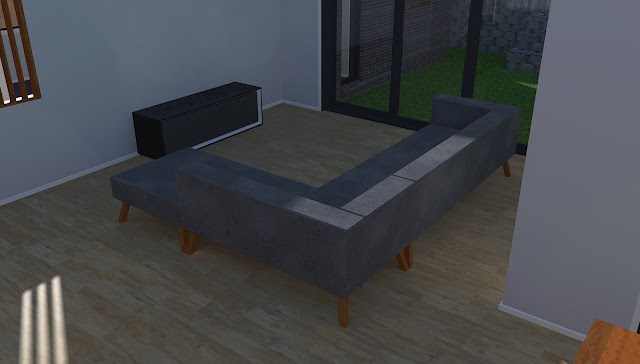 Next was our entertainment unit. I'll try and remember to take some more shots of the unit itself, it's got an LED strip in it and is designed to look as if the central section is floating. We've had it for quite a while. It will likely end up in the theatre room but for a start my anticipation would be that it will be placed in the living room.

The couch is a rouch approximation of the focus on furniture "enterprise corner" - something we plan to get in the fairly short term after building (although we will see what happens!) 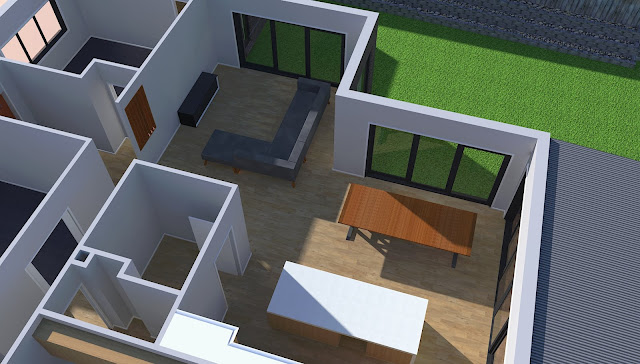 I had the ceiling and roof turned off for rendering as it made the process much faster than with the lights on (and leaving the roof/ceiling on with lights off meant for very dark renders!) 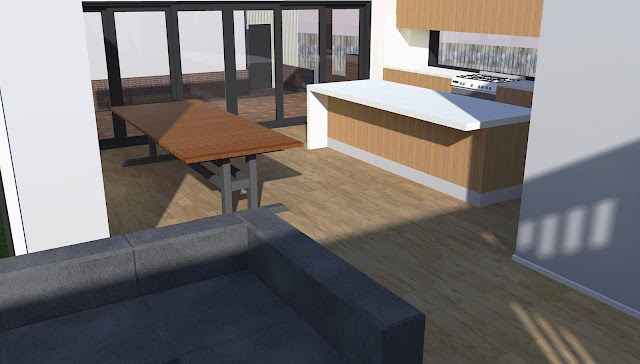 This table is a rough idea of something I'd love to hand make. It's 3m long and just over 1.1m wide, in a farmhouse harvest style. Dimensionally I just used 90x35mm timber to build it in sketchup; so it's a practical concept that could be build reasonably cheaply then painted/stained even just as a temporary table. Down the track we'd love a live edge timber slab based table, although commercially purchased these are exorbitantly expensive!

We're also in the process of trying to organise our cut and fill. We'll be doing this part ourselves to save some dough, although we will need a retaining wall on the north boundary which may involve some intricacies - because it's on the boundary and 1.2m tall it will need engineering; plus because we're doing the work ourselves we will likely need a separate building permit - obviously if it works out not much difference in cost to have the builder do the retaining wall it would be much easier to do as part of the build and finance it as such!
Posted by Clinton Warburton at 7:00 PM