We've been to-and-fro a little with the builders over a couple of finishes we weren't quite sold on.

Today my A4 colour samples from Dulux arrived. While Sarah is now satisfied with Dieskau as the wall colour, neither of us were totally sold on the Orangeade for the door. We've decided against being brave and are going to do both the front and laundry door (which we've verified is a PMAD4 style door as per the front entry door) are going to be painted Colourbond Monument to match the fascia, guttering, window frames and garage door.

Part of the reasoning is the interior of the door will be painted the same colour as the exterior, and while I still feel the exterior of the front door would be great in a striking colour, I don't like the idea of clashing with any future styling or art choices we make for the living and dining area. Similarly the outside of the Laundry door can be seen through the kitchen splashback window - this would be similarly distracting if it clashed with any styling choices for the kitchen.

In lieu of the orangeade door, we're thinking of a large lasercut corten steel street number to attach to the wider left hand section of the rendered entry archway. This should give a similar colour tone to the orangeade once it starts to rust.

The eaves are to be painted natural white.

The power meter box will be painted monument.

Downpipes will be painted closest match to the brick colour which looks likely to be Colourbond Terrain.

We're going to proceed with the marble splash back tiles as they're adding just over $1,000. They're real marble - so need to be sealed (which is included in the price). It's a fair chunk of cash but it's one of those things - any guest we ever have over will see them, we'll see them from the main living areas of the house, and if we'd not done it we'd forever be kicking ourselves. To re-do later would be a bit of a nightmare!

We've also decided to drop the vinyl plank under the kitchen island idea, mainly because it's another thing we were just not quite sure on. We're going to go with the Polytec Classic White Sheen melamine for all the kitchen cabinets and doors including the rear of the island now (despite making builders price us on createc, a more shiny finish) because we're reasonably sure that we will be happy with the amount of reflection and it shouldn't show up too many fingerprints. The Createc would also have cost an extra $1,300.

We may end up adding some sort of feature to the underside of the island as part of the styling of the house later, but for now white will do. White will allow any stools we choose to be a bit more of a feature in their own right anyway.

I drew the bath for the main bathroom in sketchup, so have been able to render that also. 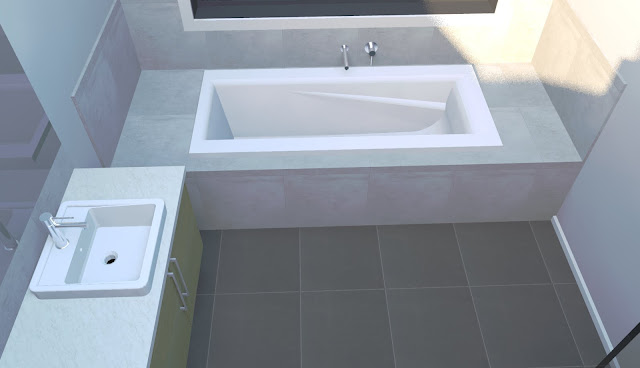 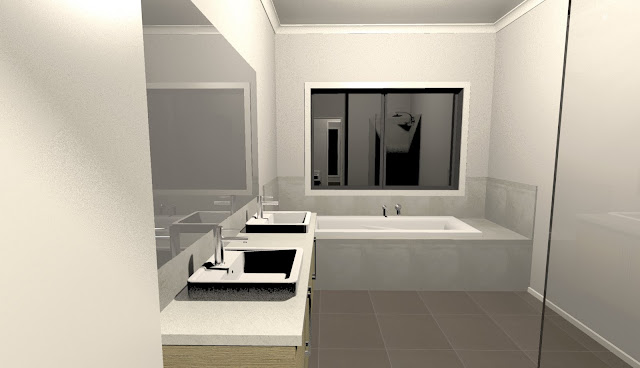 I'm not rendering these at the highest quality because it takes too long, that's why the images can tend to be a little grainy.

Here's a couple more renders I did of the kitchen before we changed the colour for the underside of the island bench. 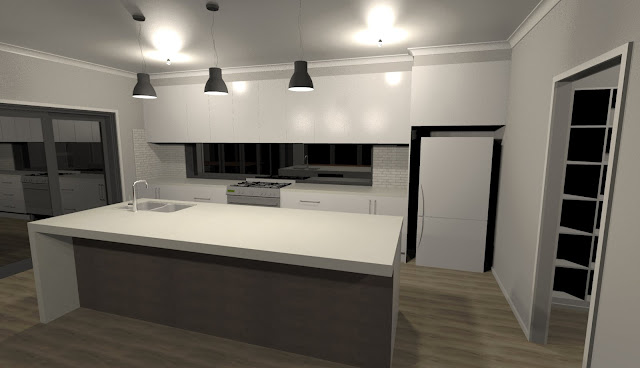 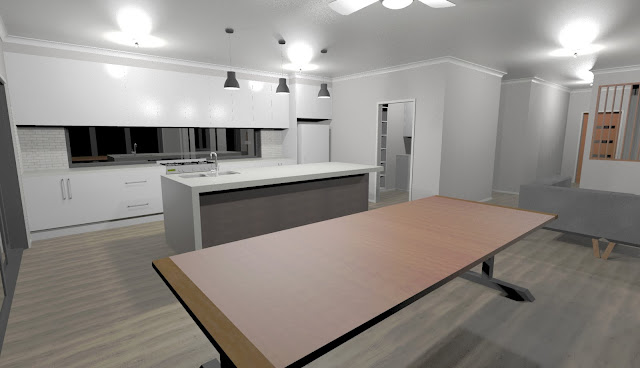 We're also having a raised seating area (100mm step up in the floor) put in the theatre and we want to put an LED light strip downlighting this step. We're waiting on confirmation for pricing of the LED strip as we may just get the wiring done and supply the LED strip ourselves.

Posted by Clinton Warburton at 5:55 AM