During our display home visits, we found the Watersun Brooklyn display home fitted us almost perfectly. Unfortunately it wasn't to be, as Watersun don't build in Warrnambool! The first sales consultant we talked to seemed to think it was do-able with around $11,000 extra for distance - but when we tried to progress further we were told sorry no we don't build there. Shattered.

The display had a 12 or 14' ceiling to the living area, with a bulkhead over the kitchen. We also liked a display area set up opposite the rumpus room (in the image below the layout there is a little different in this area to the display) 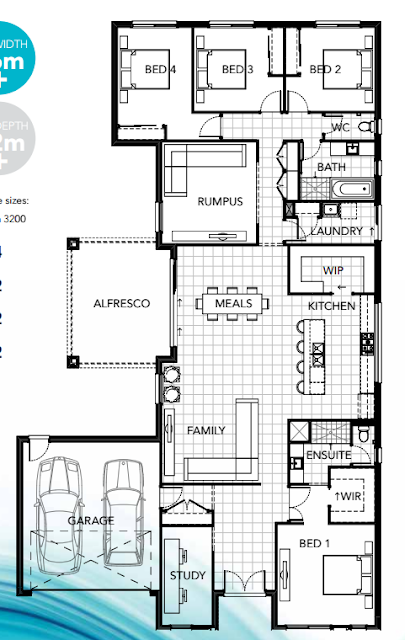 Based on the fact we couldn't build with them, nor could we copy their design due to copyright; I decided to teach myself some more CAD programs (I'd previously used Solidworks and Sketchup) and to design something ourselves. None of the volume builder's plans really fitted what we wanted. 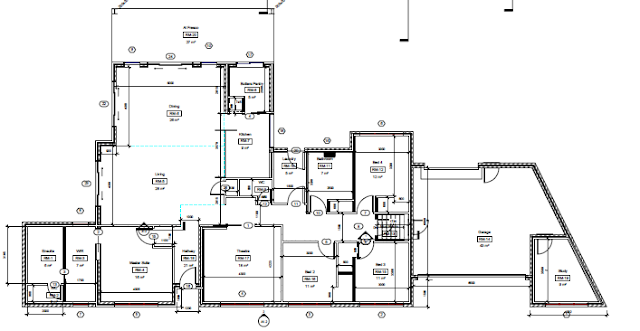 We borrowed some basic layout ideas (although not dimensions) for the living area/kitchen and display area opposite the theatre room; and designed the building to have the main living area facing north (to the left of the image) as well as seperating the master suite from the childrens' bedrooms. We also put an offset in the hallway to allow visitors to not see the bedroom wing, without adding too much unnecessary hallway space. We put a 12' ceiling in the living area and master bedroom. 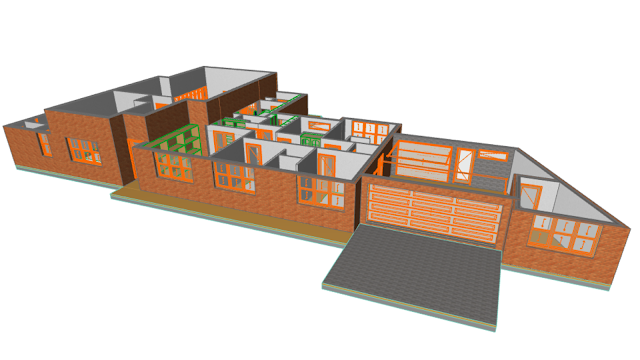 We then set about speaking to builders about building our house as planned. Unfortunately it wasn't to be as all the locals we spoke to quoted approx figures of $440,000 (about $1,400/m2) initially. Only one seemed interested in helping us adapt our floor plan to a more budget friendly prospect. 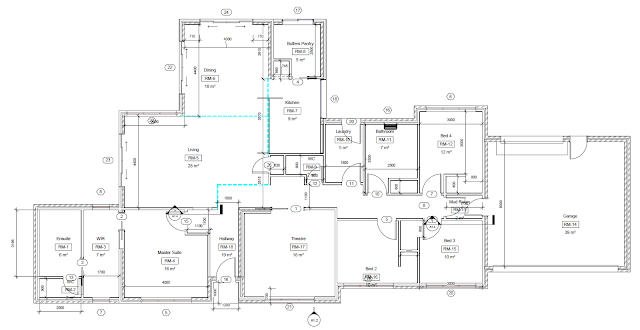 This is the revised floorplan. The builder advised the hallways were excessively wide at 1500 and could come back to 1100 without feeling cramped (we were worried about going too narrow because some of the display hallways seemed very oppressive, many are 900mm and coupled with a standard 2400mm ceiling feel very dark and gloomy.) Doing this over approx 10m of hallway saved 4m2 (at the original $1400/m2 that's $5,600 just in hallway reduction!!.

We also removed the study from the other side of the garage. While it's a great feature we enjoy in our current house, it's also a big cost due to the shape - putting a roof on it becomes difficult and I can always build something later between the rear of the shed and the fence (temporary structure over the sewerage easement) or worst case scenario we can save up and build in the original location in the distant future). This allowed the roof structure to be a traditional hip roof rather than being too complicated which allowed us to come back to a more reasonable estimate of around $970-1100/m2.

The dining area was far too wide (nearly 6m) so we shrank that back to around 4m saving another 10m2 (or $14,000) - as the builder pointed out - a normal table will never look right in that space.

The horizontal timber slats are a neat touch we saw in a few display homes. Keeping the base wall high allows furniture to be sat opposite without any problem, but still allows the room boundaries to feel normal - while allowing better vision through the house from the entry way.

Initially we had a butlers pantry to the left of the kitchen, however it cramped the space too much - changing to a more open kitchen really improves the sensation of space, allows us to have a window as a splashback, and allows us to run a much wider entertainer door to really open up the house and give a sensation of indoor/outdoor living.

The living area roof we dropped to match the rest of the house, we were told approximately $2,500 to lift the whole house ceiling height to 8.5' and another $10,000 approx to go to a 9' ceiling. Opposed to ~$60,000 to do the 12-14' in the living area (the costs skyrocket as all trades suddenly need to use scaffolding, more materials, different engineering for the structure etc)

We also decided not to do the Alfresco area as part of the build. We'll have gas put there for future connection to a mains connected BBQ; but it's not an area we need immediately and that money can go towards other features/finishes that are harder to add later.

The builder also advised the cost of stacker doors is quite similar to the cost of an equivalently sized window, so we changed the two north facing windows to doors to further allow the space to be opened up. In the drawing I've used stegbar door sizes.

He also advised we should try and avoid having any external walls over 12m long without being stepped in/out as it doesn't look right. We then checked out a few local houses and we agree - the ones with long straight walls are just boring boxes with boring rooflines.

Note we're deliberately dropping the garage height from the house, the block has a 1200mm fall from one side to the other - a rather gradual slope given the length of the frontage. In relation to the main body of the house it's probably closer to 600mm running diagonally from the front left to rear right corner.

Dropping the garage gives two benefits - one - carrying the ceiling height from the house through allows us to run much taller doors - this means potential to drive a car on a car trailer (or a future caravan or boat - not just for us but for a potential buyer in the future who may see the rear shed as a perfect storage shed for toys) - it also allows us to level out the garage height to closer to that of the footpath/crossover/driveway to cater for lowered vehicles.

We shrank the kids bedrooms from 3.3x3.3m to 3x3m This is plenty for a single bed + desk, or even a queen bed. Our current house has 3.3x3.3 rooms which are great, but we also have tall-boys in each room which take away 300mm effectively giving the same space.

Note the air lock between the house and garage - this is done to stop ingress/egress of interior air in winter and summer extremes - the house/garage entrance is the primary one we will use while occupying the house, the front door will only really be a guest entrance so an airlock is not so important there. The laundry acts as a second airlock and as a mud room for the shed in the back yard.

We plan to have a walk through robe, a seperate room for the toilet in the master suite, a double vanity, and double showerheads. To make it all fit in this space, we decided to put the bath in the same combined/tiled wet area as the showers. this also allows us to use frameless glass shower screens and a free standing bath (this is on Sarah's MUST list) and it should look quite nice. Using a sliding door for the entry to the ensuite also means the space on the wall opposite the vanity will give us room for a decent towel rail (maybe even heated, budget depending!)

The main toilet is in a seperate room to the bathroom. This serves two purposes - it means we have a guest toilet that doesn't involve going to the "kids" bathroom, and we have a basin alcove to allow washing of hands etc (basically a mini "powder room"). It also means the kids can use the toilet while another is getting ready/showering in the mornings. We are going to get a double vanity in the bathroom as well for the two girls.

We drew a walk in pantry and decided to leave a space at bench height for an applicance shelf (toaster etc) and so bigger applicances (mix master, blender etc) are at easier heights to just lift and move to the kitchen island.
Posted by Clinton Warburton at 4:26 PM