Decided to build a sketchup model of the facade of the building to try and see what our current colour ideas look like on the building.

Ended up adding rooms (to allow window views to make sense) and landscaping.

These are just exports direct from sketchup, not renders, so there are no lighting effects or anything fancy like that. I also haven't geolocated the model so North is off. 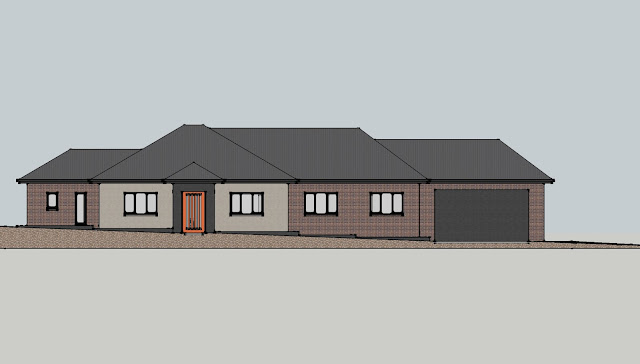 One of the colorbond colours we're using (I don't remember which) suggested Dulux Orangeade as a compatible colour; here I've used it on the front door. We'll see if it sticks. Sarah doesn't want a red door (it's been done already) 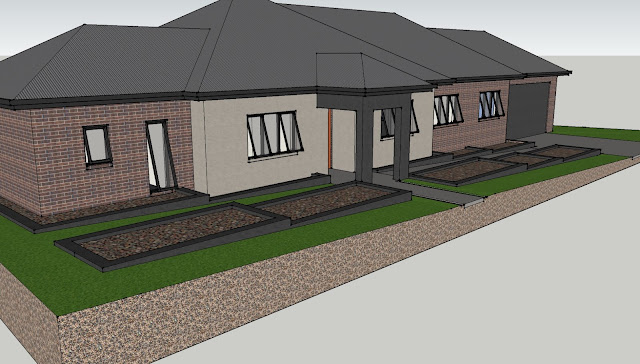 A&L don't have their windows in sketchup so I had to modify someone elses models to make double ended awning windows. 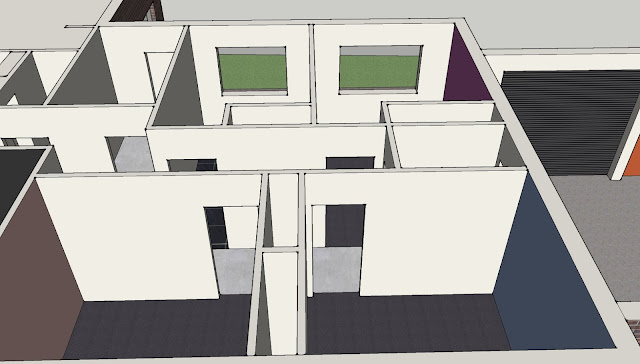 Got carried away putting in interior and painted the kid's bedrooms including my choice of feature wall colours (not sure if the other half will agree!) - Pantone's 2016 colours of the year - Rose Quartz and Serenity on the two west facing rooms, and their 2014 colour of the year "Radiant Orchid" for the east facing room (to try and make up for the cold morning light). The white so far is Dulux Whisper White. 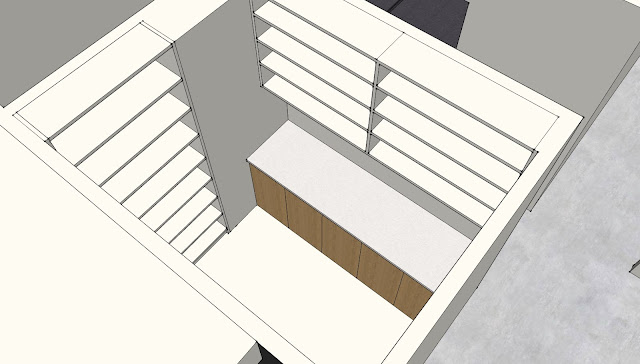 Playing with ideas for butlers pantry shelving - the builder has said they'll do fully adjustable shelving to the left, but I'm not sure if they're specing the overheads with doors or open as per this. 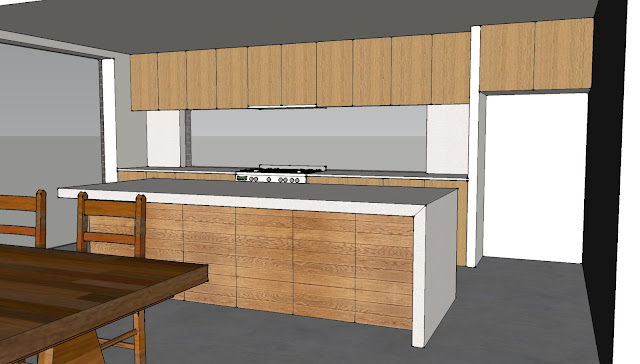 Kitchen, currently showing polished concrete, Caesarstone Nougat benchtops, Cedar doors under the island and Laminex Honey Elm on the cabinet doors. This is all subject to change, of course :) Monument feature wall to the right. 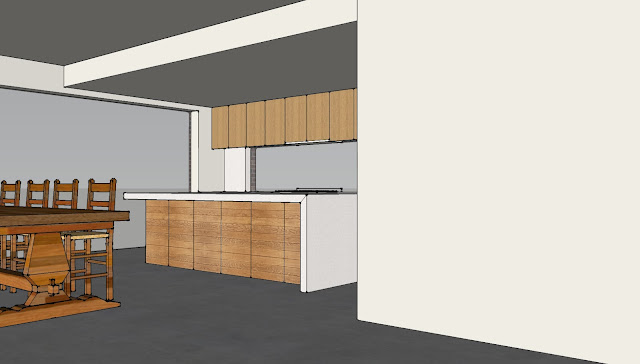 Showing the bulkhead idea, the bulkhead could end level with the island (which is back from the wall to right of image by about 600mm) - note this isn't the table we're planning to use just one from the 3D Warehouse that's the right dimension (3000x1100) 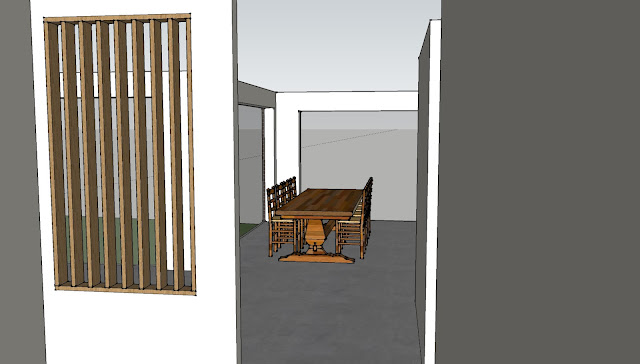 Feature slats, coloured in laminex honey elm - the plan is to try and find a stain that gets this similar. 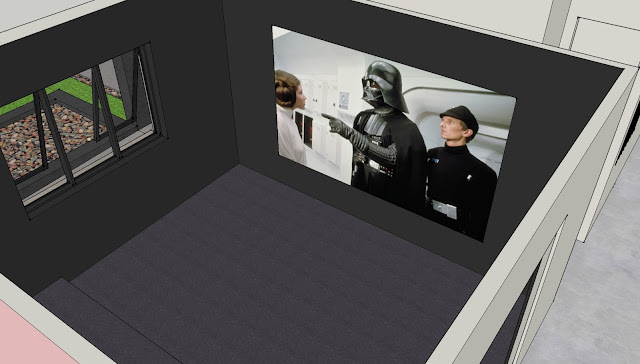 Theatre Room with 1.75m high projection screen (a very very distant project!) and monument walls all round. I like this darker (but neutral) look. 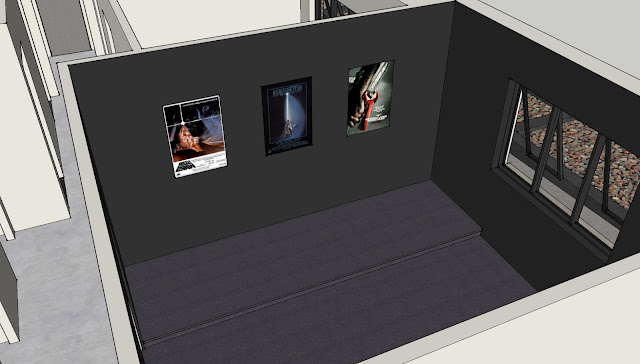 Cinema rear wall showing movie posters and raised seating step - this step should be about 1200mm deep and 100mm off the normal floor height. 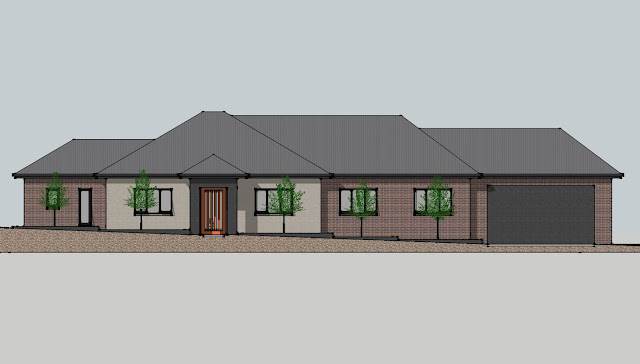 Added Pear Trees - I think it'll come down to a battle between pear and cherry trees when it comes to front shade, unless anyone has any suggestions? 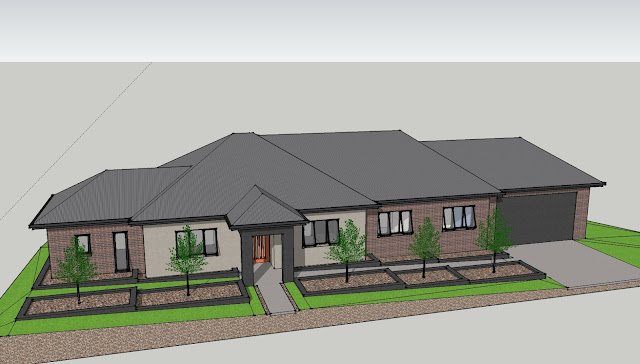 Stepped garden beds, path to the footpath and ramp down to the driveway all seem simple enough, although I'm sure this stuff all costs money!! Doesn't hurt to have a plan though!

In other news, the builder e-mailed today to say they've finished with our plans and are starting to price it all properly. I think they're pricing with their standard inclusions and we then go and add in whatever extra we need (even things we've already discussed, perhaps) to ensure we can see where the money is going.
Posted by Clinton Warburton at 7:37 AM