I've been playing with Twilight Render which is a free-to-hobbyists renderer for sketchup - at first I wasn't a fan but it's actually quite powerful once you get used to how it works. It definitely takes its time to render but that could also be my computer showing it's age! 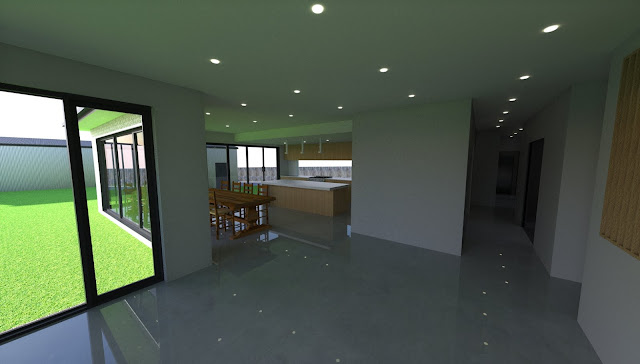 I still haven't quite worked out lighting (which is why even though I've added about 20 downlights, this image still looks dark-ish) but I've got the bump mapping for the grass, reflectivity for the concrete etc nailed. I've also made some exceptionally dodgy looking pendant lights for the sake of testing the render. Since we have no idea what we actually want to put here we will work on that for the future!

Prior to this, I geo-located the site in sketchup and rotated the model to close to the right orientation (it's off slightly as we're facing just over 5 degrees to the east as the house is aligned with the front boundary and it doesn't quite run a perfect north-south (see the surveyor's drawing with angles on this page)

This allows us to do a pretty good approximation of shadows in both the longest part of the year (summer solstice): 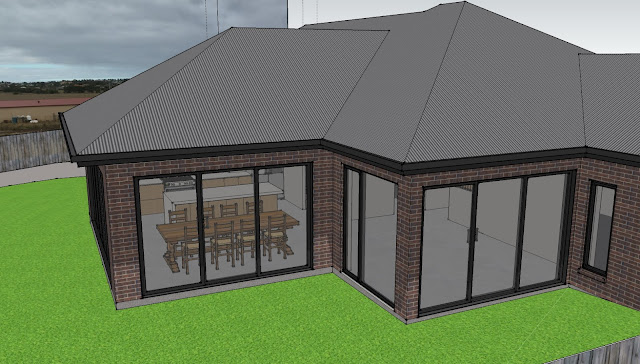 As well as the shortest part of the year (winter solstice): 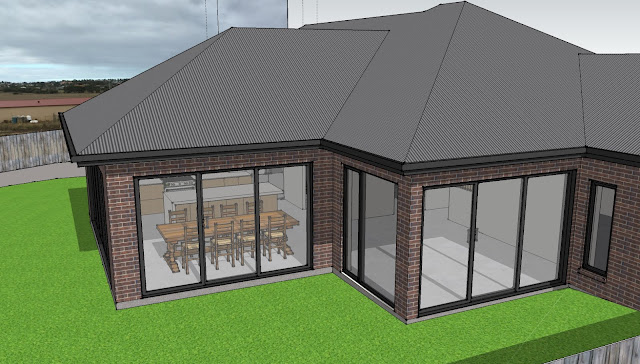 For those that don't know, the reason North Facing living areas are so important is that with correct shading, you can get free heat from the sun in winter by letting the sun onto an appropriate thermal mass (in our case, exposed polished concrete) which then radiates the heat during the evening. Having the correct size eaves to shade the floor from this sun allows the heat to be kept out during the hotter parts of the year.

My initial modelling suggested a 600mm eave would be required, however 450mm has been the recommendation from the builder as apparently that's the width of the board they use; to do it in 600mm would have meant battening it out every 450mm and cutting the boards into 600mm length; and to do the whole house just to shade two north facing windows seemed a little crazy.

I spotted a homeone forum member's post where they had aluminium blades above their window, fixed at an angle that permitted winter sun but that blocked summer sun. I think we'll see how we go with the 450mm eaves and watch the sun on the floors in the summer (perhaps utilising time lapse on the go pro) before we commit to having something similar made, but that's definitely an option.
Posted by Clinton Warburton at 5:20 AM