Despite the amount of thought that I've put into planning the orientation of the home, limiting south facing windows (the house will have only the one, the splashback in the kitchen) and plans for west facing windows to be shaded by both eaves and foliage, one of the things we really consider to be essential for our home is some form of air conditioning.

We had a portable unit at our previous rental, which we brought with us to our current rental; while living here our landlords were kind enough to install a wall mounted reverse cycle, which is much quieter, faster and by the looks of the latest electricity bill, cheaper to run.

Standard inclusion with our builder is natural gas fired ducted central heating. We have had this in both of our previous rentals and consider central heating an essential also. This leaves us with the decision - do we augment the central gas heating with a few strategically placed split system air conditioning units (at approx $2,500 a pop, installed)  - probably one in the dining/kitchen/living area, and a couple of smaller units in the theatre and master suite; or do we go for a bigger central unit.

Going to a central add-on unit means upgrading the ducting to larger ducts; which means it's not a great retrofit option as you'd have to pay for two lots of ducting. There's also the question of how well a gas heater designed for smaller ducting will work with larger ducts (if the larger ducts allow the air to cool, it will condense and as it condenses it will slow down making the fan less effective).

The other option is a complete system based around a reverse cycle inverter. 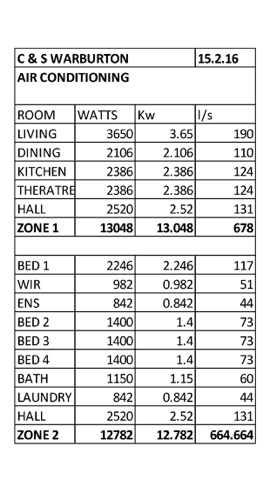 I sent the drawing I did yesterday with my approximation of the builder's adjusted dimensions (it'll still be very slightly off as he is re-sizing the whole plan based on brick dimensions to windows etc) and the 2700mm ceiling heights to my dad, Barry, who is one of the proprietors at Cri-Tech Plumbing Services. He prepared and sent back the chart above gives the required energy to heat the rooms by room, separated into a ''day'' and a ''night'' zone.

By using zones, we will be able to get away with a 13kw unit - a quick glance around shows a number of brands have suitable units in the $5-6,000 range. Actron do an ESP system which have variable fan speeds which allows the system to operate quieter than other systems and also more efficiently, which is his recommendation.

Approximate another $2-3,000 for ducts, thermostats, dampers (remote controlled vents that open and close to control flow to different areas) and add labour. My brother's already offered his assistance in that regard (he's a refrigeration mechanic) - how good is family?

Interestingly, if I went 3 phase, a unit capable of doing the whole house is only about 50% dearer. The zoned systems should be able to do both zones at once but may not get to 21 degrees - perhaps 24 from what I've read on other people's blogs?

I also looked into the Nest learning thermostat - however the suitability of this system rather than the built in systems for the chosen A/C system depends on the complexity of the setup. Nest looks like a great option if we opt for a reasonably simple system - especially if paired with a kwikset kevo wifi lock which allows the system to know when you leave and enter the house so it can turn on and off ''away'' mode.

A little side note on costs to run the AC - and this is highly theoretical - if you know better and can correct me, please feel free to do so - this is a learning experience!

All new properties in Australia have to meet a 6 star energy rating.

For Warrnambool, this means the house's maximum thermal load is to be 151MJ/m2 per annum.

To meet this rating, our property at 200m^2 of habitable floor space should require no more than 30,200MJ/year.

The COP (cost of production - basically how much heat/cooling energy it creates per unit consumed, or its efficiency) of the Actron ERV-17AS is averaged between heating and cooling at 3.8 (yes, this is 380% as much heating or cooling energy produced as put in) so that 700kW/h of thermal load per month should require 184.21kWh of electricity.

Our electricity currently costs $0.248697/kWh which means on average, per month - the house should cost around $45.82 to heat/cool.

Add to this that our intention is and always has been to install some form of PV solar, and electricity makes much more sense than gas. We will still use gas to boost our hot water and for our cooktop and bbq because we both hate induction and electric cooktops.

It's important to note that this is by no means an accurate way to determine these things, as I'm not 100% certain that thermal loads include cooling. You obviously effect the system's cost depending on how many hours you're home, the schedules, zoning and temperature tolerances you set for your HVAC, your utilisation of the home's energy saving features (cross flow ventilation i.e. opening windows and doors if it's hot inside and cool outside, closing living area blinds after the sun goes down in winter to keep the heat in the thermal mass, using ceiling fans to increase occupant comfort without running the heat/AC).

Now I've just got to find out how much the builder factors for their gas central system and how I go about organising (and paying for out of our construction loan?) that part. Just another step in the process I guess!
Posted by Clinton Warburton at 6:18 AM